My oldest son, now a teen, has high-functioning autism. Fortunately, he is bright, witty, social, and easily lovable. But as a younger child, he really struggled with social situations, gross-motor skill delays, and sensory issues. In large group gatherings, he wanted to go home or go somewhere quiet and be held. Attending family gatherings for the holidays was tough--on us as parents and especially for him. And Easter festivities were no exception. 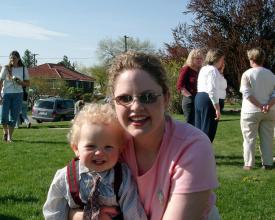 My husband's side of the family is big: 50-plus family members when we all gather around. Celebrating Easter at a favorite aunt's house was a longstanding and much-loved tradition. This family egg hunt was awesomely over the top; the trick wasn't finding the eggs, it was to avoid stepping on them. Our little guy wanted to go to the party and see all his cousins, but it overwhelmed him.

We'd pull up to the curb and immediately see the hundreds of eggs the Easter bunny had strewn all over the yard. Most kids would be thrilled to see this robust spread of Easter goodness. My son, however, instantly felt overwhelmed. From his point of view, it looked like a never-ending sea of multi-colored stuff. Visually, it was too much. Then, when all 15 or so cousins arrived (now a total of 20) and the race was on, my son wanted to be anywhere but at that egg hunt. So what did we do?

Over the years we tried a bunch of things to ease our son's worries. We didn't do all of them every time. Mostly, he just kind of figured things out because he knew what to expect from the tradition. We hope that some of these ideas might help your child if they, too, seem overwhelmed by Easter's beloved egg hunts.

1. Practice. Before a big Easter egg hunt, you can role play at home. Hide a few eggs around the house for them to find. You don't have to insert treats. Let your child be thrilled by the hunt. Maybe you start by hiding one color of eggs. Another time, add another color, and so on until you have a multi-colored effect. You don't have to do all the hiding, either. Usually, older siblings love to help with this game.

The Day of the Hunt 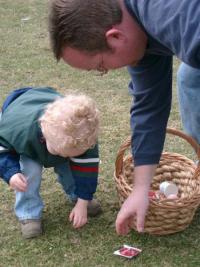 1. Arrive early. Spend a few minutes with your child to assess the situation when it's quiet and relatively calm. This is also a good time to explain that everyone will help to gather the eggs and that some children will find more eggs for their baskets. It isn't a competition to see who can find the most eggs.

2.Bring necessary gear. Would your child cope better wearing headphones before and during the hunt? If so, make sure you bring them. Put bunny ears on them if you want to be extra festive. Your kid will be super in style.

3. Explain the rules. Children who are on the spectrum want to know the rules. Are all the eggs fair game? Just certain colors or a certain amount? When can they start? Where do they put the eggs that they find? Even children who don't have special needs want to know the rules. Once, my mother took my nephew to his first, big, public egg hunt. Her instructions were, "When the fire engine's siren goes off, you run!!" Well, it sounded, and he ran . . . and ran and ran. Luckily, he heard her yelling that he should stop and pick up some eggs, and he saw what the other kids were doing, so he followed suit. We still tease Grandma about her incomplete instructions that day.

4. Bring your own basket. Make sure your child has a place to put his eggs. It's too confusing if they have to shuffle them around or use a makeshift container that was grabbed at the last second. They don't need a fancy basket, but they need a basket similar to what the other kids might have. It doesn't make sense to them if everyone else has baskets and they have a grocery bag. Trust me; I did this once. The grocery bag, in my son’s eyes, was not a suitable substitute. He wasn’t trying to act spoiled. It just didn’t match what the other kids had. As long as it was a basket or bucket, he was fine. Sack no.

5. Take your time. They don't have to rush. All the other kids might be rushing, but your child doesn’t have to. In my son's case, his gross-motor skills were lacking. He simply couldn't run as fast as the other kids. So we told him ahead of time and kept reassuring him during the event that he was OK to go his own speed. We were careful not to hurry or rush him along.

6. Go with your child. If your child wants you to come along, go along! Carry the basket; offer encouragement and a suggestion or two so that they don't become overwhelmed. Be careful, though, not to give lots of instructions, or you will add to the chaos. Instead, lead gently by example or just point at an egg. If you're at a public egg hunt that doesn't allow parents to be involved, see if an older cousin or friend would be willing to help them.

7. Let them stop or opt out if they want to. For the first few years, our son would pick up a few eggs and then stop. He was done. We'd encourage him to find more, but he didn't want to. So we decided not to push it. If he was happy with two or three eggs, then that was just fine. Sometimes he just wanted to watch the other kids from the sidelines. That was fine too. 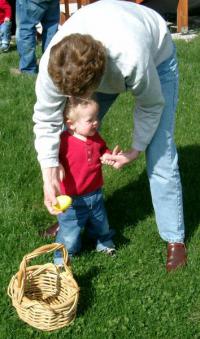 Personalize a hunt. Especially if the group egg hunt didn't go well for your child, make an Easter egg hunt just for them. You can do lots of eggs or just a few. One color or many. Your child can take all day to find the eggs if he wants to. As my son has grown older, we've done an egg hunt just for him many times. I have to say that, hands down, those are his favorite. One time, we even did a night hunt. I put glow-in-the-dark adhesive tape on the eggs and hid them. Then he went out at dark with a flashlight to find them. He loved it!

Looking back, I think that helping our son learn to manage social occasions such as these family celebrations has helped him immensely with his social skills. He’s not afraid to interact with his cousins. In fact, he enjoys their company and looks forward to seeing them. He loves his down time too, but he now has a little brother that he can coach at the egg hunts. Big Brother is now the expert Easter egg hunter, thanks to all the practice he’s had over the years.

Do you have a child(ren) on the Autism Spectrum? If so, how do you help them if they feel overwhelmed by holiday traditions? Email me at kerry@kidsoutandabout.com.

And for those who want to find out great strategies for hosting the easiest, least expensive, most memorable, and fastest party on the planet, check out the KidsOutAndAbout article Tips and Tricks for a Great Easter Egg Hunt Party.

Kerry Smith, Salt Lake City editor for KOAA, is also a former editor for the Ensign magazine. She and her husband, Cole, are the parents of two sons. Join her at GoBeyondAutism.com or Facebook to learn more and share your ideas.