Review of the Agitators at Geva Theatre Center 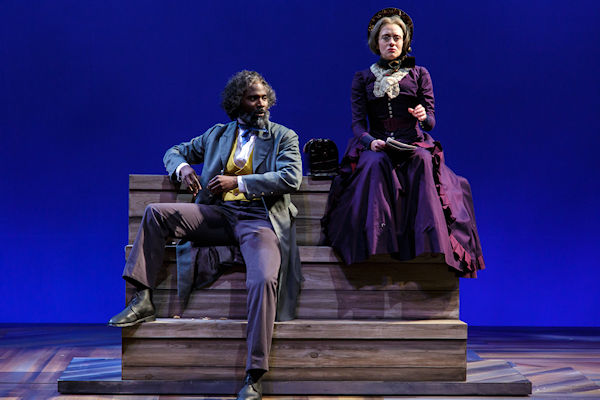 When history comes alive onstage at Geva Theatre Center in The Agitators, it is a beautiful thing to see. Kudos to Logan Vaughn who makes her directorial début at Geva Theatre Center in this timely play, focused on both the friendship and adversarial relationship between Susan B. Anthony and Frederick Douglass. This thought-provoking drama commemorates both this year’s 100th Anniversary of women’s right to vote in New York State, and next year’s 200th Anniversary of Frederick Douglass’ birth.

This play was commissioned around three years ago, and is set in the 19th and 20th Century, yet it is startling how many of its issues resonate in the backdrop of the 21st Century. Although the play centers on the 45-year friendship between Susan B. Anthony and Frederick Douglass, who are the only actors onstage during the play, the issues of voting rights, white privilege, Black Lives Matter, predatory behavior against women, economic disparity, and terrorism against people of color are woven throughout, almost as characters unto themselves.

Many people have a robust perception of Susan B. Anthony’s driven and feisty spirit, but Frederick Douglass was more private and his personality remains more mysterious. There is minimal record of what actually transpired between them – only five letters that are known of remain – yet playwright, director and actors collaborate to bring these two titans to life in a most believable way. The intensity of the two individuals’ purpose is matched by the intensity of their personalities onstage, and the talent of the actors.

As the most photographed man of the 19th Century, Cedric Mays steps out of those many black and white photos to brilliantly portray Frederick Douglass as a strong, sensitive, intelligent, yet imperfect man who sometimes needs Anthony’s insights to see the forest for the trees… especially when it comes to women’s (and his wife’s) equality.

In today’s terminology, Madeleine Lambert’s Susan B. Anthony is a Badass. Ms. Lambert’s Anthony is that gutsy woman who traipsed across the country regardless of danger, voted in an election regardless of legality, and stood for temperance, abolition of slavery, and most vehemently, women’s right to vote.

Two favorite scenes take place at the train station, where the tracks represent the chasm that has come between Anthony and Douglass in the wake of their feud over the 15th amendment (giving black men – but not women – the right to vote), and at the ball park, where the game represents their determination to work together.

It cannot be easy to write a play between only two characters, where no actual events happen on stage. Yet the battle of brilliance and the war of words that take place between Mat Smart’s characters is so engaging  that we are drawn in.  In a particularly poignant moment, each character asks the other, “Can you ever know what it’s like to be me?” showing how their overlapping advocacy on human rights issues, after many years of friendship, still cannot bring them into total alignment or understanding.

The elegantly sparse set, designed by Jack Magaw, serves as a picture frame to focus attention on these dynamic individuals.

If you are interested in Susan B. Anthony or Frederick Douglass, Rochester’s history or history in general, or if contemporary issues are important to you, do not miss this play. As different as this play is from Geva’s last show, In the Heights, this will be another sell-out, so get your tickets quickly!

The Agitators is onstage at Geva Theatre Center through November 12. It is appropriate for sophisticated teens through adults. Click here for show times and tickets.

Carol White Llewellyn is Editor of Beyond the Nest, Host and Producer of Conversations with Creatives, and an Arts Advocate.