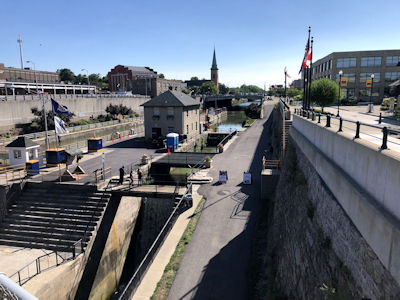 Lockport, NY is a canal town with an interesting history. Located less than 20 miles east of Niagara Falls, it became a boom town as the use of the canal grew. Canal voyagers had to wait while their boats were transported via the Flight of Five canal locks, up or down the 60 foot drop of the Niagara Escarpment; those weary travelers found comfort and food in Lockport. Today, the process is much more quickly handled by Locks 34 and 35, which means there is no longer a lengthy layover. Now, Lockport is a lovely little canal town, rather than a burgeoning boom town.

When the canal was originally built, its waters were used to power mills and eventually factories. A tunnel was blasted out on the north side of the canal to help supply water power to the factories of Birdsill Holly, who was an engineering whiz as well as a local character of somewhat questionable repute. The Erie Canal, this tunnel, and the early history of the community is the core of the Lockport Cave & Underground Boat Ride. 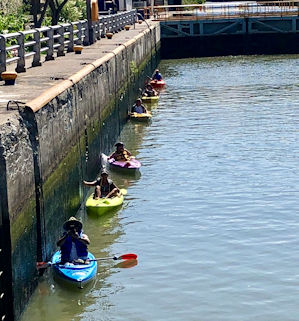 You start the tour at the ticket office, located at 5 Gooding Street in Lockport. We were lucky enough to get a young guide named Ben, who was not only knowledgeable, but also quite funny.

The original Flight of Five, including a display of a vintage canal boat, can still be seen adjacent to today's locks. A small Erie Canal Museum also displays a model of the original locks. The locks were very busy on the day we visited, ferrying kayakers through the escarpment. On other days, larger pleasure boats are often seen traveling the 339 mile distance of the canal that runs between Waterford, near Albany, and Tonowanda, near Buffalo.

We walked along the canal, waving to kayakers, discovering the history of the community's locks and canal, and hearing insights on the three former factories, the beautiful ruins of which line the path. Along the route, you can see the zipline that flies the adventurous across the canal, suspended mid-air. Then we climbed a set of stairs and made our way through a dimly-lit tunnel with its own fascinating history. 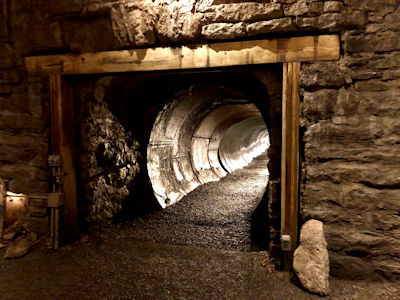 After traversing the tunnel, we boarded a boat that can accommodate around 24 people and gently floated along a narrow waterway, learning more about the history of the tunnel and its geological elements. As we got to the "end of the line" where you can see a beatiful, lit geological feature, everyone shifted from the seats facing one direction to seats facing the opposite direction, and we floated back to where we began, then headed out of the tunnel.

Those who'd like to take this tour should be aware that there are many steps to climb, and you're walking across uneven ground both on the exterior and interior of the tunnel, so the 70-75 minute tour is not currently handicap or stroller accessible. You may wish to bring a sweater or jacket for the cave, which holds a temperature of around 65° F. Although the minimal lighting throughout the cave adds to the historical ambiance, some visitors may be more comfortable using a dim flashlight. You may also get "kissed" by the cave's occasional water droplets on the 10-minute boat ride.

The Lockport Cave & Boat Ride is open from early May through late October.  Click here for pricing and hours of operation, which vary by season. 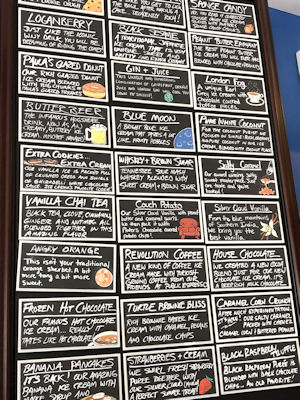 The Lockport Cave & Boat Tour is a fun adventure for people of every age who are interested in history, the Erie Canal and the geology of the region.

P.S. When you leave the Lockport Cave & Boat Tour, be sure to stop by the Lake Effect Artisan Ice Cream Shop located on 79 Canal Street in Lockport, across from the ticket office! You will find some of the most scrumptious and unusual flavors you'll ever have tasted, such as "Couch Potato" (Silver Cloud Vanilla with peanut butter and caramel swirls), London Fog (Earl Grey ice cream with chocolate covered toffee pieces), Peanut Butter Epiphany (Peanut Butter ice cream with chocolate & peanuts), Butter Beer (a Lake Effect ice cream version of the famed Harry Potter drink -- and delicious!) and so many more! Definitely decadance in a cone!